Sister Julian Dion, OP, died after a prolonged illness at Saint Martin Residence, Fremont, CA, on July 28.   She was 90 years old and in the 69th year of her religious profession.  Born on March 17, 1930 in Chicago, IL, she was the daughter of Julian Dion and Marie Ann Anctil.

In the second grade she boarded for a few months at Immaculate Conception Academy, San Francisco, where she met the Dominican Sisters.  Her association with the sisters continued at St. Elizabeth Elementary and High School, Oakland.  In 1949 she entered the Dominican Sisters of Mission San Jose and made her first profession of vows in 1951.

For 12 years Sister Julian ministered as teacher and administrator in Catholic schools. Her assignments included St. James School and St. Anthony’s School, San Francisco, and St. Catherine’s Military School where she served as principal from 1956 - 1965.   During the next 35 years, 1965-2000, she served as treasurer at Flintridge Sacred Heart Academy, La Canada Flintridge; Immaculate Conception Academy, San Francisco; and the Motherhouse, Mission San Jose.

Funeral services will be private.  Burial will be at the Congregation’s cemetery, God’s Acre, located at the Motherhouse. 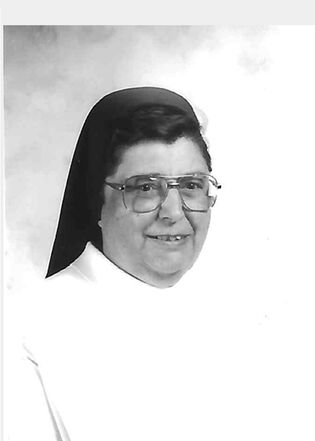